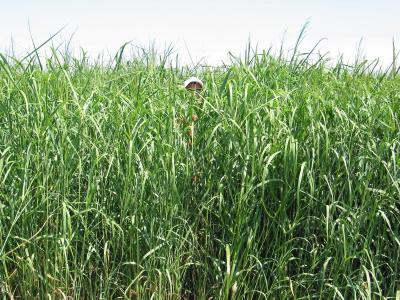 “You can’t make a good car go fast without a good engine. CenUSA Bioenergy is the car and Liberty is the good engine.” This is Dr. Ken Vogel’s analogy for his new switchgrass cultivar Liberty, which he helped to develop over almost two decades of plant breeding.

Vogel, University of Nebraska Professor and USDA ARS Research Geneticist, began working on Liberty in 1996 along with the USDA-ARS grass breeding program. Their goal was to develop a high-yielding, lowland-type switchgrass cultivar, widely adapted throughout the Midwest, to be grown as a biomass energy crop. The USDA released the new cultivar November 2013, in partnership with the University of Nebraska-Lincoln.

Liberty produces about two tons more biomass per acre than typical northern switchgrass cultivars, which is in keeping with CenUSA Bioenergy’s mission of generating higher yields on marginally productive cropland. Rob Mitchell, research agronomist for the USDA-ARS believes that Liberty has the ability to greatly benefit farmers by increasing their net return per acre.

“Compared to other available cultivars like Shawnee, Liberty has increased yield by more than 40 percent in eastern Nebraska. If biomass sells for $70 per ton, Liberty could have a gross return of $175 per acre more than Shawnee,” Mitchell said. “Liberty will be one of the most important cultivars for biofuels. Its ability to produce high yields is a critically important component for cellulosic bioenergy,” he said.

Vogel sees the greater yield per acre as a big step for the CenUSA Bioenergy project. “This is the first true bioenergy switchgrass in the Midwest. The first one really adapted for the Midwest and for use as a bioenergy crop. It also improves the economic feasibility of using switchgrass as a biomass energy crop in the Midwest,” he said.

When research began in 1996, the USDA-ARS Breeding Program crossed two switchgrass cultivars: Summer, an adapted cultivar developed from germplasm originating from southeast Nebraska, and Kanlow, a high-yield cultivar from Oklahoma.

One of the reasons for selecting these lowland cultivars was to improve winter hardiness. After three generations of breeding following the initial crosses, Vogel and Mitchell were able to retain the winter hardiness of Summer and the high yields of Kanlow. Due to this, Liberty has become the first high-yielding, lowland-type cultivar that can survive Midwest winters.

Vogel believes that Liberty could be grown in other areas besides the Midwest; it appears to be adapted to the eastern United States, all the way to the Atlantic Ocean. Extensive trials are underway to determine how well it performs in these areas.

The next step for Liberty is to increase seed production so that it can be made available to farmers. Seed producers can request seed for establishing certified seed fields through Husker Genetics at the University of Nebraska-Lincoln. Liberty will be available to farmers in spring, 2016.