2015 a Turning Point in the Bioeconomy 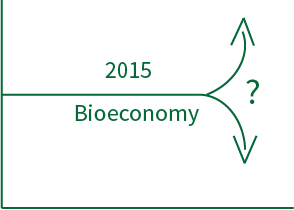 With the year 2015 in full stride, many experts see the decade’s halfway point as a turning point for the bioeconomy; particularly for perennial grass-based biofuels. Although these second-generation fuels show promise, there are many hurdles industry must overcome.

Both Ken Moore, professor of agronomy at ISU and CenUSA project director and Robert Brown, director of the Iowa State University Bioeconomy Institute and a CenUSA co-project director, believe that corn ethanol has played a major role in the development of the bioeconomy and renewable energy, but advanced generation fuels are now needed.

Moore believes that the Renewable Fuel Standard (RFS) has been a key catalyst, driving growth for corn ethanol, second-generation biofuels and the bioeconomy as a whole.
“We need to keep the RFS in place,” Moore said. “We really just started this race with alternative fuels.”

Catherine Kling, economics professor at ISU and CenUSA co-project director, pointed out that the current market was in a holding phase from an investor standpoint, and this lack of investment has hindered technological growth.

“The technology growth continues to be slow for cellulosic biofuels. They are still not cost competitive, so for this sector to go big time is a ways away,” Kling said. “But something like the new DuPont plant [in the final phase of construction in Nevada, Iowa] could be a spark, time will only tell though.”

“A few ethanol plants using corn stover and perennial grasses as feedstock have opened recently and I think the rest of the industry will be watching them closely,” Zach said. “If they can show it’s possible to sustainably produce a profit from these feedstocks, it could mean further expansion for perennial grass feedstocks.”

Entities outside of universities and government agencies are taking a different vantage point for the 2015 bioeconomy.  LaVon Schiltz, executive director of the Nevada [Iowa] Economic Development Council and a CenUSA advisory board member, said that many corporations she works with are realizing that they are going to have to do business differently.

“Sustainability is the name of the game now and companies are taking that to heart,” Schiltz said. “You are going to start seeing more products being made from biomass material. For example, a few companies are beginning to utilize biomass to make nylons.”

Schiltz highlighted that industries like the pharmaceutical sector are recognizing the potential of biomass material as a component for their products. She stated that she is working with a company based in Asia that relies on byproducts of feedstocks like corn stover.

Although there are signs of demand for production of commercial bioproducts and biofuels, experts question whether this can be sustained with prices dropping at the pump.  Both Moore and Kling said a short-run mindset of investors and industry leaders should be avoided. Moore commented that today’s investments should be based on the fact that fossil fuels will be gone in 100 years.

Kling stated that future policies for second-generation biofuels should take both environmental and environmental concerns into account.

“We need to develop the infrastructure and the technology for 30 years down the road,” Kling said. “The public needs to understand that we have to plan for the future right now and figure out what alternatives we will need.”