Biochar - Jack of All Trades 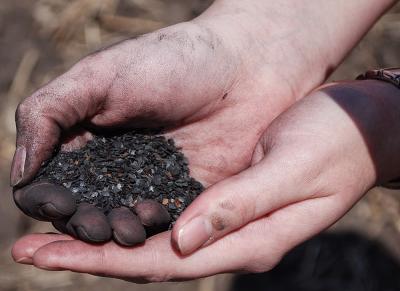 No other soil amendment offers as many positive environmental impacts as biochar.  From adding nutrients, to improving water-holding capacity to reducing greenhouse gases, it is truly a jack-of-all-trades.

Biochar, is a carbon-rich material that is produced by heating biomass at very high temperatures in an oxygen free environment. In the production of bio-oil, plant biomass is put through a pyrolyzer, where it is rapidly heated then cooled, transforming it into a renewable liquid fuel and biochar. When biochar is mixed with soil it becomes part of the soil humus, thus improving the quality of the soil.Increasing the water holding capacity of the soil is a key property of biochar.

“Biochar increases the soil’s surface area and thus increases the soil’s ability to hold water. The water is held in the char particles’ internal pores,” said David Laird, CenUSA Bioenergy collaborator and professor of agronomy at Iowa State University. “With the extra water storage from biochar, these water reservoirs can help a crop survive a dry period.”

According to Laird, biochar is especially useful for degraded and eroded land which has reduced ability to hold water and plant nutrients. Biochar acts as a sponge, holding more water while allowing less water and nutrients to flush through the soil and into the ground water or nearest creek.

It has also been used to help reclaim degraded areas like mine land and urban industrial sites; adding biochar to these soils can help them to start growing vegetation again.

Besides having the ability to act as a soil enhancer and reduce nutrient and water loss from agricultural land, biochar also plays a role in helping to mitigate climate change. The half-life of biochar placed on land is in the hundreds to thousands of years, this long-term stability effectively sequesters carbon in the soil making any biofuel produced in the process carbon negative.

Laird compared leaves to biochar for long-term stability.  In a very short time, leaves (or any biomass) added to the soil, will decompose and the plant carbon will return to the atmosphere as carbon dioxide. But when you take the same leaves and transform them into biochar first, carbon is very stable and does not dissipate quickly.

CenUSA Bioenergy and David Laird are working on several projects pertaining to biochar. In addition to examining how it affects agricultural production, soil quality and greenhouse gas emissions, they are studying its chemistry and exploring new ways to use biochar.

Currently biochar is sold worldwide by about 150 companies, mostly small garden and specialty retailers. Most of the biochar sold is used for plant potting, green roofs, land remediation and filtration of runoff.

“Right now the price of biochar is very high and too expensive for farmers to use extensively,” Laird said. “In the future we expect companies to expand their production of biochar which will bring the price down; then we will see farmers adopting it for farmland usage.”