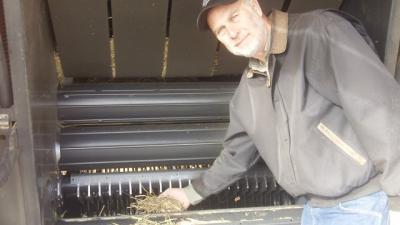 Harvesting switchgrass, with its thick, stiff stems, for use as commmercial feedstock for the growing bioeconomyrequires a different approach than harvesting annual forage grasses.  But just like forage, the faster switchgrass or other perennial grasses dry down at harvest, the fewer weather delays and quality losses producers will suffer.

The tough stems of perennial grasses posed another harvesting problem—they resist compression into conventional bales, which are often much less dense than the 15 lbs. per square foot that meets legal transport weight limits. Denser bales would mean lower costs for aggregation, storage, and, especially, transport for farmers.  By using a pre-cutter on either large-round or large-square balers the logistics team was able to increase the density of switchgrass bales by 4 to 6 percent. But where precutting the long, tangled grasses before they went into the baler really paid off was through increased grinding productivity, by 35 to 40%, while reducing the grinding energy requirement by 40 to 45%.  These bales handled and stored the same as un-cut bales. 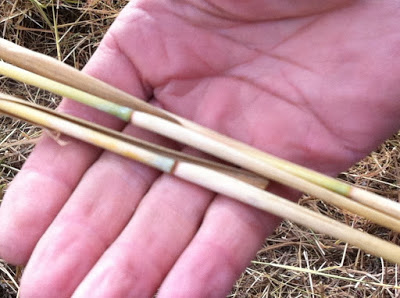 Precutting alone did not produce the desired bale density to allow weight-limited transport.  The logistics team then evaluated a commercial high-density large-square baler, specifically to determine how achieving greater density affected specific energy requirements.  This machine achieved the desired bale densities, although fuel requirements increased considerably. Next step for the team is an economic analysis comparing the cost of achieving high-density with the potential savings.

The team was the first to quantify the tension of baling twine needed for high-density biomass crops. These bales need stronger twine, but that can cost more than $3 per dry ton, or almost one-quarter of the cost of baling. The team’s work will help baler and twine manufacturers understand how to develop cost-effective solutions to maintaining bale density.

A baler that’s lighter, cheaper, and simpler than a conventional baler sounds like a dream for switchgrass producers. The team redesigned an experimental machine to achieve these lofty goals, which can produce bales with densities from 15 to 20 lbs. per square foot. Someday, with much development work, this baler may be commercialized, if the cost is not prohibitive.

Researching harvest methods for biomass isn’t a job for couch potatoes. Kevin Shinners, project director for the Feedstock Logistics team, baled hundreds of tons of switchgrass in his work. “Everything is field scale,” Shinners said. “I face the same frustrations with weather, labor shortages, and broken equipment that every producer faces.”

But the team also spent plenty of time on their computers, developing computer models to help producers do a better job of harvesting and storing perennial grass crops. One, a drying rate model, predicts switchgrass drying based on weather conditions and configuration of harvest equipment. Another model, of harvest progression, uses the drying rate model to predict the rate and extent of switchgrass harvest across the Upper Midwest.  The model will help optimize the harvest fleet size required for a particular size biorefinery.

Feedstock logistics, from harvesting through storage and delivery, represents 40 to 50% of the cost of switchgrass. For producers to be willing to grow switchgrass for a sustainable biofuel industry, they must be able to do so efficiently and profitably. The CenUSA’s Logistics team is helping them achieve that.