Above: The Gulf’s hypoxic zone at the base of the Mississippi river is caused by nutrient runoff.
(Image from: National Oceanic and Atmospheric Administration)

We rely on models to tackle big problems. They allow us to be creative, imagine the future; try out different solutions and predict outcomes. Water quality impacts from land use change are one of those big problems that may benefit from modeling efforts.

Despite more than 40 years of largely voluntary efforts by federal, state and local government, and tens of billions of dollars of investment in conservation, nationwide progress on nutrient control has not yet been achieved. Concentrations of nitrogen (N) and phosphorus (P) in streams and groundwater are 2-10 times higher than recommended to protect aquatic life and contamination of drinking water is still widespread. The consequences of agricultural nonpoint source pollution are particularly evident where the Mississippi River enters the Gulf of Mexico. The Gulf’s hypoxic, or “dead zone” is the largest hypoxic region in the US and the second largest in the world.

“CenUSA is a large project working to evaluate the production of perennial biofuels in the Corn Belt, said System Performance team collaborator Phil Gassman of Iowa State University. “We’ve been working with people across many institutions and have been fortunate to develop a tight collaboration with a great group of scientists.”

Three papers co-authored by Kling and Gassman along with other team members Indrajeet Chauby (Purdue University), Raj Cibin (Penn State) and Yiannis Panagopoulus (formerly a post doc at Iowa State now at National Technical University, Athens, Greece) have recently been accepted by or are in review with the Journal of American Water Resources Association (JAWRA). A fourth overview paper, currently accepted by JAWRA, “Policy Implications from Multi-Scale Watershed Models of Biofuel Crop Adoption across the Corn Belt,” compares the findings from these three studies and discusses policy impacts.

The team’s research addresses one of the country’s key policy questions, what are the water quality impacts of converting cropland and/or marginal lands to cellulosic biofuel systems in the upper Midwest? Uniquely, their models compared land use changes at different scales: within three smaller watersheds, the Boone River Basin in Iowa and the Wildcat Creek Basin and St Joseph River Basin in Indiana and at a larger scale, using a regional model developed across the Upper Mississippi and Ohio Tennessee watersheds (Figure 1). 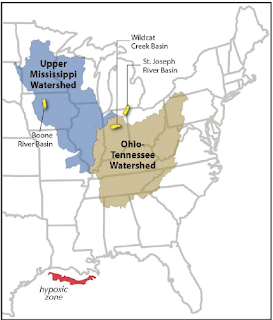 To contrast results across the models, the team developed a set of scenarios, using the most promising biofuel feedstocks: corn stover, switchgrass and miscanthus; grown at different intensities (Corn stover harvested at 20% and 50% removal rates; and miscanthus and switchgrass grown in all cropland of the watershed versus targeted regions, environmental sensitive areas (lands greater than 2% slope) (Table 1). Results showed major environmental improvements from planting perennials, and that targeting their conversion on marginal lands can result in a disproportionally bigger impact. In general, and perhaps surprisingly, corn stover removal had small negative impacts on environmental losses. The modeled results may lead biofuel policy toward utilizing both corn stover and perennial grasses, targeted to marginal lands; something the authors state could be a potential “win-win.”

Table 1. Impact (percentage of change) of scenarios on total phosphorus.

In the latest JAWRA paper, the authors explain that, “there is a clear evidence that there are gains from targeting perennials to marginal land.”  Watershed scale modeling of the type done by the CenUSA team, “can provide useful information to policy makers concerning the environmental gains from adopting changes in the existing [CRP] program or develop new options in the future…”

The water quality benefits of perennials reported in these studies may encourage policy makers to reconfigure federal agriculture and energy policies including the Renewable Fuel Standard (RFS) and USDA conservation programs like the Conservation Reserve Program (CRP), Environmental Quality Incentive Program (EQIP) and Conservation Security Program (CSP) to utilize corn stover on prime acres along with perennial grasses, targeted to marginal lands; something the authors state could be a potential “win-win.”

Rather than paying farmers to set land aside, policy makers, particularly those looking at budget impacts, may see a benefit from programs that allow corn (grain and stover) to be harvested on prime lands while aiming perennials on marginal lands.  If farmers were paid to plant perennial crops like switchgrass and the crops could be harvested, federal rental payments for conservation programs like CRP could be lowered to reflect the commercial benefit provided to growers. Similarly, the Hypoxic Task Force, with its goal of state nutrient plans reducing nutrient loads by 45% may see an opportunity in exploring the role of perennials and biofeedstock production in the Mississippi River watershed.