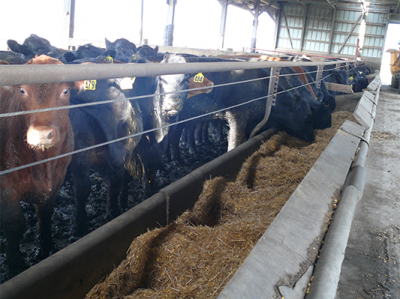 CenUSA’s vision is building a sustainable biofuels and bioproducts system for the Midwest based on switchgrass and other native, perennial grasses. Now two new studies, led by Stephanie Hansen Iowa State University (ISU) assistant professor in animal science and Daniel Loy, ISU professor of animal science, are evaluating the use of switchgrass as cattle feed. Iowa State University intern Stephanie Clark is assisting in the studies. If effective, farmers could have a new market and help jumpstart grass production.

The first experiment compares the feeding value of two roughages, corn stalks and switchgrass, in a total mixed ration (TMR). TMR’s are a common method of feeding livestock that mixes grain and chopped forage together with vitamins and minerals to meet the nutritional needs of the animal. Livestock TMRs might be compared to pet food that we buy at the grocery store – only on a big scale! However, unlike pets, cattle have rumens, special digestive systems, and require a certain amount of roughage to function properly.

The second study compares the digestibility of corn stalks and switchgrass, pretreated with calcium hydroxide. Pretreatment has been shown to improve the quality of lower quality forages that tend to be high in lignin (think wheat straw versus alfalfa hay) by breaking down lignin and making the forage more digestible to the animal.

Researchers have seen some positive results in favor of switchgrass in terms of cattle acceptability. In mixed rations, cattle seem to do a lot of nitpicking (or ‘sorting’) with corn stalks but seem to eat more consistently with switchgrass. This may be because switchgrass chops up finer than corn stalks, making a more consistent blend and helping prevent ‘sorting,

Hansen described the problem with sorting by comparing it to Skittles candy. Imagine that you have a bag of Skittles and you need to eat all the colors in order to get balanced nutrients. But, if you like reds the best you might go through and eat all the reds first. Then, later, when you need another treat, you may go back and eat your second favorite color: yellow.

A new market for switchgrass could provide additional economic benefits from growing switchgrass and could encourage more farmers to incorporate it into their farmland.

“The more uses there are for a product, the more likely it is that at any given time one of the uses will dominate in terms of profitability,” Assistant Professor in Iowa State’s Department of Economics and CenUSA co-project director, Keri Jacobs. “Having more options for a product helps market development.”

Hansen believes that the cattle trials show “good potential” for switchgrass as a forage crop.

“The best place for switchgrass will probably be in feedlot type system where it is used in fairly low levels as a roughage,” said Hansen. “To be used more widely as a forage, it would have to be harvested earlier, when the plant is lower in lignin and more digestible. But we’ll know more when the results are in later this fall,” said Hansen.