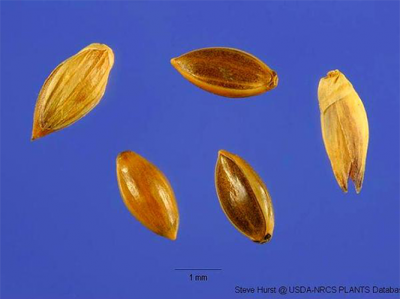 The first foundation crop of superstar ‘Liberty’ switchgrass seed will be harvested this fall. Liberty, bred specifically as a perennial, high-yielding bioenergy grass, adaptable to the upper Midwestern climate, is producing 25-40% higher biomass yields than traditional varieties in CenUSA field trials. Certified seed producers (contracted growers who agree to follow strict production rules) in USDA Plant Hardiness Zone 4 or 5, who agree to market it under the name, ‘Liberty’ may obtain licenses to grow and sell the seed.

“We’re really excited about the commercial prospects for Liberty switchgrass in the U.S.”, said Anne Kinzel, CenUSA Bioenergy COO. “Its ability to produce greater yields than the best yielding current switchgrass varieties will be a very big deal.”

“With today’s corn prices coming down, growers may be interested in growing switchgrass seed,” said Ken Vogel. “Because of its high yield, growers planting ‘Liberty’ can make money with it, said Ken Vogel.

There are two ecotypes of switchgrass in the U.S., lowland varieties, typically found in more southerly, low wetland and river bottom-land and upland varieties, found in the drier, northern latitude grasslands that commonly must withstand drought. The lowland varieties are typically higher yielding, but can’t withstand the tough northern winters and die out when grown in more northern latitudes. The switchgrass cultivars released to date for the Midwest have all been upland types.

Vogel began breeding native grasses specifically for bioenergy in 1990. He created ‘Liberty’ by breeding ‘Summer’, an upland variety with ‘Kanlow’, a lowland type, a real genetic tour de force because the two flower about 30 days apart. Starting with crosses in the greenhouse, Vogel eventually produced ‘Liberty’, a hybrid that flowers about two weeks sooner than its lowland cousins. This two week window, gives Liberty the time to transfer sugars from its leaves to its roots, enabling it to survive long Midwest winters.

“Last year we saw tremendous winterkill with lowland cultivars but ‘Liberty’ had no damage, said Ken Vogel. “It may not produce as high as some other lowland types, but it will survive and that is essential.”