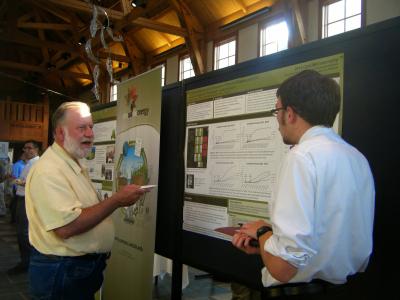 CenUSA Bioenergy’s advisory board is a diverse team of engineers, scientists, corporate vice-presidents and even a patent agent. With only a few producer advisers on the board, John Weis helps bring an alternative viewpoint and background to the group.

“I try to bring the farmer’s perspective to this project and that is ‘what do I get out of planting bioenergy crops?’” Weis said. “Many board members have worked for a university, a chemical company, etc. I’m a guy who grows a crop and wants to get paid for it.”

Even though Weis established himself as a forward-thinking producer, it was his daughter’s working relationship with Dr. Carl Rosen, a CenUSA collaborator and head of the Soil, Water and Climate department at the University of Minnesota, that provided him the step in the door at CenUSA. While Weis’ daughter was in high school, she developed an interest in bioenergy, specifically with biochar. This interest led to her contacting Rosen who in turn ended up renting several acres of highly erodible ground from Weis to plant switchgrass test plots on.

The working relationship between Rosen and Weis continued to grow. Weis’ land turned out to be the ideal, extreme runoff plot Rosen needed for his research. Thus when it came time for CenUSA to appoint people to its advisory board, Rosen nominated Weis due to his bioenergy crop producer background.

“John has brought diversity to the board and passion for alternative fuels, along with his practitioner experience,” Rosen said. “Through John’s experience as an implementer of biocrops, he has been able to be a witness for the board of the challenges biocrop producers face each day.”

Today, Weis has 15 biochar test plots that his daughter and another University of Minnesota researcher set up on his farm. Weis’ participation in CenUSA and interest in his daughter’s research has made him a local biochar advocate for other farmers. He said that biochar’s role in improving soil structure is appealing to farmers, but a lack of availability is a major drawback.

“I talk with a lot of other farmers about my firsthand experience with biochar and the possibilities that it provides, and I also listen to their feedback which I try to bring back to CenUSA,” Weis said. “But at the end of the day for other farmers and me, it will all come down to the return on investment which will be crucial for the popularization of bioenergy crops.”