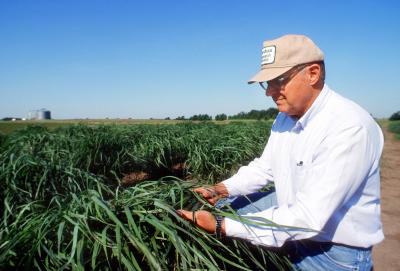 Ken Vogel, plant geneticist and breeder and the world’s leading expert in switchgrass, has retired. Vogel served as Research Leader of the ARS Grain, Forage and Bioenergy Research Unit in Lincoln, Nebraska and coordinator for the USDA Regional Biomass Research Center for the Central-East region. His research led to important contributions in the understanding and use of switchgrass, a high-yielding, ecologically important perennial grass native to the U.S. His breeding program was responsible for the hybridization of switchgrass and the release of ‘Trailblazer,’ and ‘Shawnee’ two of the most widely used switchgrass cultivars in the Midwest.

A native of western Nebraska, Vogel received his B.S. and M.S. degrees in Agronomy from Colorado State University in and a Ph.D. in Agronomy/Plant Breeding and Genetics from the University of Nebraska in 1974. He was a leading researcher for the National Initiative for a Carbon Negative Economy, and his research on perennial grasses’ ability to sequester carbon earned him many professional accolades, including being inducted into the ARS Science Hall of Fame.

Vogel began research on switchgrass in 1974, at the University of Nebraska-Lincoln. The native-grass breeding program he led is the longest continuous one of its kind in the world. His work on breeding native grasses specifically for bioenergy began in 1990 under contract to U.S. Department of Energy’s Oakridge National Laboratory.

Vogel also studied the breeding, genetics and management of perennial grasses and legumes for use as forage in grazing systems and as conservation plantings. The results of this include the release of improved cultivars of big bluestem, indiangrass, prairie sand reedgrass, intermediate and crested wheatgrass, forage triticale and Canadian wildrye.

Ken Vogel’s dedication, leadership, and collaboration with researchers across the country helped make switchgrass the leading advanced generation bioenergy crop. Thank you Ken, and best wishes for your retirement!