From Switchgrass to Science Fairs: The Brian Prchal Story 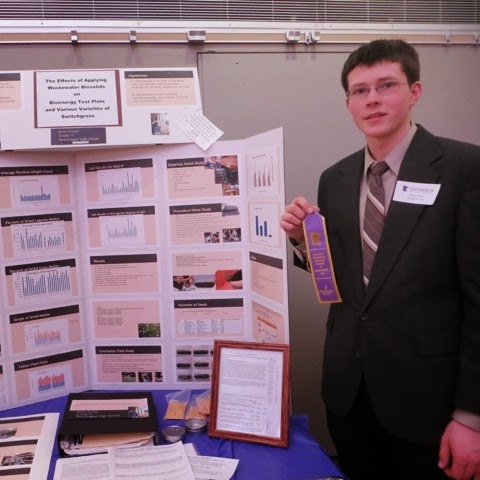 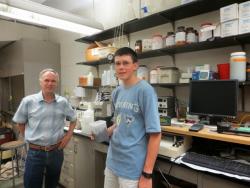 Above: Brian Prchal with CenUSA advisor and researcher Carl Rosen, University of Minnesota

Prchal’s research project, “Effects of Applying Wastewater Biosolids on Bioenergy Polyculture Test Plots and Various Varieties of Switchgrass— A Two Part Study” won several awards including the Ricoh Sustainable Development Award, and the American Association for the Advancement of Science Award. He was also awarded the Silver Grand Overall Award by ranking in the top 10% of all projects at the fair. Prchal was invited to compete at the International Science and Engineering Fair, held May 11-16 in Los Angeles.

Prchal, who is a junior at New Prague High School in Montgomery, Minnesota, evaluated different amounts of biosolids applied to switchgrass and other bioenergy crops to determine the best application rates. Biosolids, solids that remain after municipal wastewater is treated, can be recycled and used as a natural fertilizer. John Weis, a member of CenUSA's advisory board, let Prchal use his land for his project.

“I have always had a strong passion for renewable energy,” Prchal said. “By applying biosolids to different plots of grass that would make more grass and in turn can make more energy because of that and I just thought that would correlate well to my goal of renewable energy in my project.”

Carl Rosen, a CenUSA researcher and research scientist at the University of Minnesota, assisted Prchal with his project.

“My role was basically to serve more as a facilitator,” Rosen said. “Brian really came up more with the idea of what he wanted to do. He said, ‘is there a way that I could work on that particular plot?’ and I said, ‘certainly’ and he kind of took it from there.”

Prchal’s interest started with biochar but when he learned more about the pyrolysis conversion process that CenUSA was doing, his focus and interest shifted slightly.

Prchal discovered that certain varieties of switchgrass are more successful for pyrolysis than others and confirmed what CenUSA believed, that biosolids make a good alternative source of nutrients.

“I think we really lucked out and had somebody who has taken the initiative,” said Rosen. “The time I put in was not that much but it has really been quite rewarding.”

Brian Prchal traveled to California for the ISEF to share results from his bioenergy research project. Although Prchal did not place, he learned that California has a lot of government support when it comes to applying biosolids and was excited about the amount of interest he received for his project.

“The judges seemed to really like my project since they thought it was unique to apply biosolids on switchgrass and bioenergy plots,” Prchal said.

Prchal was able to meet people from all over the world and went on stage in front of about 3,000 people.

“I am so happy I had the opportunity to participate in this once in a lifetime experience,” Prchal said.